This idea of experimenting with interactivity is a topic I’ve been working on for the past several years.  Over the next several posts, I will share some of my observations on experiments with social and content interactivities. The first experiment I’ll discuss here is an attempt by a corporate producer to encourage an aggregated version of content interactivity.  This case describes a special event in the season of a television series, Ghost Hunters.

Airing on American cable network The SciFi (SyFy) Channel, Ghost Hunters is a reality series where a documentary crew follows The Atlantic Paranormal Society crew as they investigate potential hauntings with pseudo-scientific methods.  The series began airing in 2004.  In a typical episode, the crew investigates a potentially haunted location with several teams of two to three people, collecting audio, video and other data that would be analyzed for any activity that could not be explained.  Since premiering, the series has produced three live shows as Halloween specials, all called Ghost Hunters Live.  Each year they select a specific location, either well-known or supposedly high in paranormal activity, from which to broadcast.

Starting with the 2007 special, The SciFi Channel created a webpage, hosted at their main site, to promote viewers to also be online during the show to give the crew feedback about the live investigation, including asking viewers to become “part of the hunt”.  The website featured live video streams of the investigation, with footage not airing on the cable network, and a “Panic Button” that viewers could use if they saw something suspicious to send the crew suggestions for those places to investigate.  I am focusing on the 2008 event; it was similar to the 2007 event in terms of promoting participation and offering non-cable broadcast footage for such participation.  The 2009 event continued the gimmick of providing additional footage online for individuals to monitor for possible evidence, including allowing the user to choose which of five cameras they wished to monitor.  The 2008 event differed from the other two in that the producers attempted to stream the actual episode online to compliment the cable viewing.

The 2008 event aired October 31, Halloween night, starting at 8pm EST.  The main broadcast was on The SciFi Channel, with video streaming at www.scifi.com/ghosthunters/live/.  The seven hour long event followed a return investigation toFortDelaware, a location that had been investigated earlier with purportedly good results.  A SciFi.com press release, dated Oct 28 2008, indicates the various interactive features they hoped would entice cable viewers to become online users:

SCI FI.COM INVITES FANS OF SCI FI CHANNEL’S HIT ORIGINAL REALITY SERIES ‘GHOST HUNTERS’ TO “JOIN THE HUNT” WITH NEW SOCIAL NETWORK … And once again, SCIFI.COM will serve as the online destination on Halloween night, offering a multi-layered digital experience for fans including an exclusive, multi-camera online video feed and thermal imaging camera views, exclusive access to photos from the live event, live Q&A with the TAPS team members and the return of the “Panic Button” for web watchers to alert the team of something they are seeing live on TV.

In the press release we can see promise of content interactivity as the corporation promoted the idea that viewers could vicariously or virtually join the crew on their investigation by helping to monitor the live feed and make suggestions about possible paranormal activity.  But that is the promise; what of the execution?

For the event, the home page was divided into four parts.  The main feature of the website was the video streaming of live feed from the investigation site.  This live stream was promoted as being different from what cable viewers would see, calling it “exclusive access to view locations in the Fort that won’t be shown on TV”.  The live stream provided footage that appeared shot from security cameras – high angle, very still — for viewers to monitor and thus feel like part of the action.  By comparing what I recorded from the live stream to the cable footage, I could see that when the show was not in commercial, the live stream tended to show what was being broadcast, although not always.  At times when the cable broadcast was focused on one team as they investigated, the online footage would follow different teams.  When the cable broadcast would be in commercial, the live stream would show the exclusive footage, which consisted mostly of the security camera footage from various spots around the location.

Besides the live stream, there were channels to allow three types of asynchronous communication.  As mentioned, there was the Panic Button, actually designed to be a big, red button.  Using this feature, the user is prompted to indicate what the investigators should look at and why.  Users were also given two fields to send comments or questions directly, supposedly, to three crew members.

One field was to ask questions to Amy Bruni, a new TAPS crew member, who was tasked for the night with answering these questions and posting the answers online.  Amy and the producers saw the questions asked before they were posted with the answers.  The other field was designed to allow users to send questions to the two founders and chief investigators of TAPS, Jason Hawes and Grant Wilson.  No answers from Jason and Grant were posted online, and there was no indication of what happened to the questions. 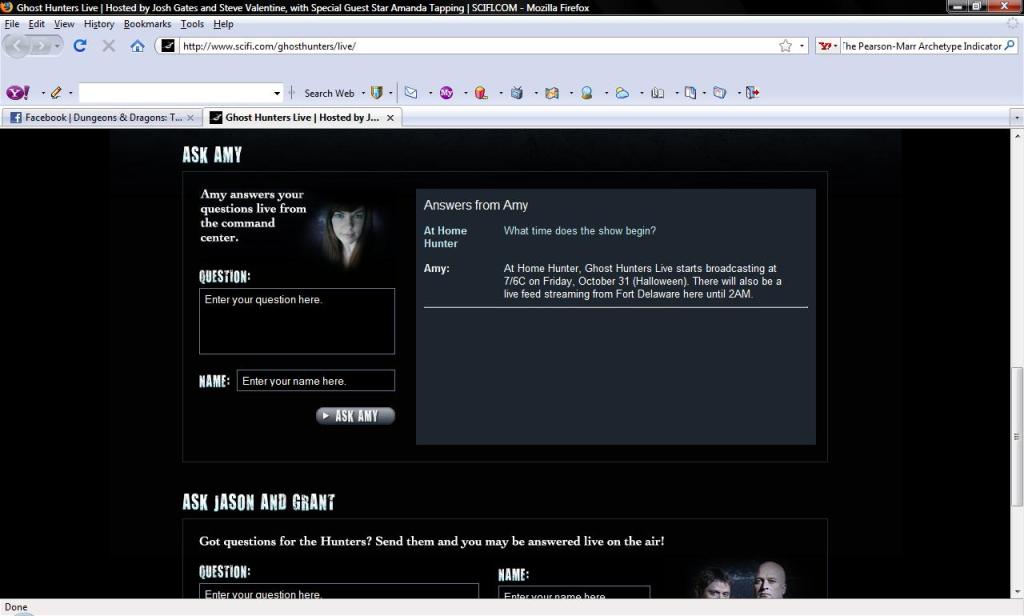 As indicated by the event’s producers, the goal of the online distribution was to promote a type of consumption whereby fans and loyal viewers could feel they were having impact by being a part of the investigation.  With this intention, the producers structured the virtual space to promote ways of interacting with the investigating crew, such as the Panic Button and the two fields for asking questions.  The producers promoted an ideal of content interactivity, leading users to believe they could potentially spot the big piece of evidence that will become the focus of the investigation.

However, in the experience, this content interactivity was more for promoting viewership than it was a consumption practice that impacted the progress of the content.  The potential content interaction occurred asynchronously, and through the filters of the producers.  For example, the Q&A with Amy.  These posts were not terribly frequent during the event, and when they did occur, they had the feel of being public relations style communication management.  The following examples were typical of the exchanges posted:

William:  Amy , will you be doing any investigating?

Amy:  Tonight I will be in the interactive center only. But I have been investigating with TAPS for awhile now. I was on the last episode at the USS Hornet and you will see me in a few more episodes this season and a lot more in season 5. 🙂

Mike:  how is the atmosphere amy

Amy:  Pretty intense actually. Everyone takes this very seriously and of course, with so many viewers watching it adds a different and exciting element. Of course, the team is always fun, so even with a little added pressure, we have a good time. 🙂

Dave:  Amy. since I’ve been watching this show I’ve been real interested in the paranormal. What struck your interest in this field?

Amy:  I was actually raised in a house that had a lot of paranormal activity. My family was very open about it and I started reading books on the paranormal when I just a kid. A couple years ago, I decided to take that interest and knowledge, and use it to investigate.

Jon:  Amy, where or who do I ask, about the team investigating a tunnel and a trail that is in my area? They are extremely creepy and I’ve had some weird things happen to me there.

Amy:  You can check out the TAPS web site, http://www.the-atlantic-paranormal-society.com for information on where and when to send case requests to TAPS. Good luck!

The answers concerned basic information about the episode, the series or TAPS.  There was no indication of questions posted challenging TAPS or the veracity of their evidence.  There was no discussion about whether or not ghosts actually do exist.  No doubt not all questions posed to Amy were answered, and as there was no way to verify the existence of those people who did ask questions, this interactive feature could just as well have been scripted.

Additionally, there was very little acknowledgement of the show’s investigators using comments from the audience during the course of the episode.  At many times the cable broadcast would display in a crawl at the bottom suggestions generated from the online consumers; the person’s name, location and suggestion would be shown, giving the viewer the sense of having a presence in the show, but with no impact as these suggestions were not used to prompt any investigations.

Several times Amy and other crew members mentioned how many Panic Button hits they had, but only once was there a pause in the episode narrative to address the suggestions.  At 3 hours and 55 minutes into the investigation, Jason and Grant answered live a call from a viewer who claimed his ancestor was a Confederate soldier and thus a prisoner at the Fort.  The viewer suggested whistling Dixie to provoke the spirit; Jason and Grant both chuckled at the suggestion, but promised to try it.  However, the broadcast never showed them fulfilling this promise.

In all, it would appear that the attempts at narrative interaction were constructed more to “pay lip service” to the desires of loyal viewers and fans who may wish to be a part of the investigation.  To gratify this desire, the producers structured the site to contain various means by which they could interact with their objects of affection – the TAPS team members and the concept of ghost hunting.  But the extent to which those viewers actually had an impact on their object of affection appears to have been minimal at best.