Ever hear of slash?

When I went to graduate school, I was not aware of slash.  But I came to learn about it, be fascinated by it, and even did my own.

Slash is a genre of fiction written by fans of a particular media product (i.e. television show, movie, comic book, religious text, etc.): in order for the fiction to be considered slash, two characters who are heterosexual in the canon, or original text, must engage in a romantic, and even sexual, relationship.

Slash is traditionally consisting of male characters partnering up, with the roots of the genre usually traced back to fans writing fiction pairing Kirk and Spock from Star Trek. The term “slash” goes back to “K/S“, which was used to signal such Star Trek fan fiction.  Slash that involves female characters tends to be called femslash.  In Japanese anime and manga, such stories tend to be labeled as yaoi. 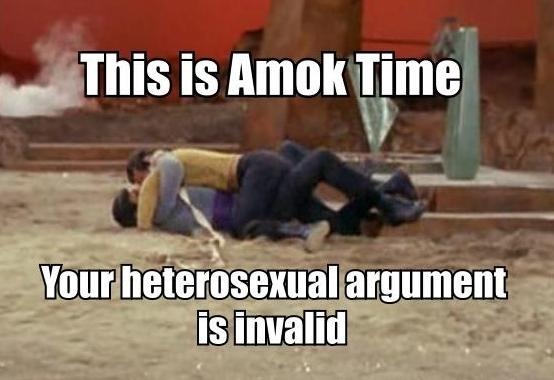 I learned all this by reading slash, by talking to slashers, and by writing my own slash.

This was a time when the Star Wars prequels were being released.  After the release of the third in the trilogy, I, and other fans, noticed something interesting in the relationship between Obi Wan Kenobi and Anakin Skywalker.  Much slash was written because of those observations.  Including my own, which you can read at a seminal website collecting fan fiction of all genres, FanFiction.net.  The story is called Down the Wrong Path.

I also engaged in a dialogue with other slashers, initiating a conversation via a series of questions about how they define slash, themselves as slashers, and the role of the Internet in their slashing activities.  You can find the report on this dialogue here: Online Slash and Identity Construction

I still look into slash every now and then, but I would never qualify myself as a true slasher.  I remain an interested outsider, seeking to learn as much as I can about this phenomenon and the people who’s practices construct it and themselves.  Thus is the essence of a stranger in a familiar land: I know of what you do; while I am not one of you, I wish to learn more.

I think that is a good position for a researcher, scholar, explorer, or just a student of human nature to take on any subject.