The Demon Within: Tensions in Exorcism Cinema

This year, while concluding the virtual world television project with Pooky Amsterdam and continuing projects on gender and media engaging (such as My Little Pony and cross-gendered media engagings), I will also be working with Christopher J. Olson on a number of projects.  One of the new ones is a consideration of the representation of women and feminist discourses in movies that present demonic possession and exorcism.

During 2013, we started watching such movies, which we are calling exorcism cinema, that have explicitly addressed exorcism or exorcist in their titles and/or in their narratives.  These are movies where the central plot is concerned with the possession of some individual and then the subsequent performance of a ritual to cast out that demon or evil spirit.  These films tackle the subject of possession and exorcism from a variety of religious affiliations, and they seem to have occurred in two key time periods: the 1970s and the 2000s. 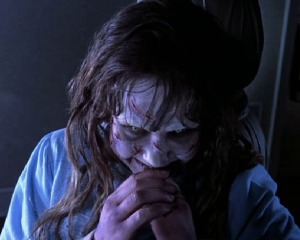 The movie that started it all, 1973’s The Exorcist, is still considered to be one of the scariest movies of all time, and remains the highest grossing supernatural horror movie of all time (adjusting for inflation, of course).  The Exorcist spawned two sequels and two prequels (one that was shot, and then reshot for release, and then subsequently released anyway — confusing, right?).  We are dubbing such movies “The Exorcist Series” and will discuss them in our research.

Now, to be fair, there were movies before The Exorcist that in some way dealt with and portrayed demonic possession and exorcism.  We are dubbing such movies the “Pre-Exorcist Series.”  The Exorcist is pivotal in this project and in this subgenre; if it were not for the success of the movie, the subgenre might not have existed as long or with as many entries as it currently has. Thus, we can truly say that The Exorcist was the start of exorcism cinema.

During the 1970s, the success of the movie also spawned many imitations and foreign copycats, generating a collection we are calling “1970s Exploitations Series” — we hope to find and watch as many of these as possible in our research.

In 2000, The Exorcist was theatrically re-released with new footage.  Following this re-release, another crop of exorcism movies emerged, bringing more realism through found footage and documentary techniques; we deem this collection to be the “Modern True Stories Series.”  Also, coinciding with these higher budget, theatrically released films, more exploitative, B-movie exorcism cinema was released to take advantage of the sub-genre’s return in pop culture and public consciousness; we call this series the “Modern B-Movies series.”

Our goal is to watch every movie from each of these five clusterings, beyond just the big titles listed here. 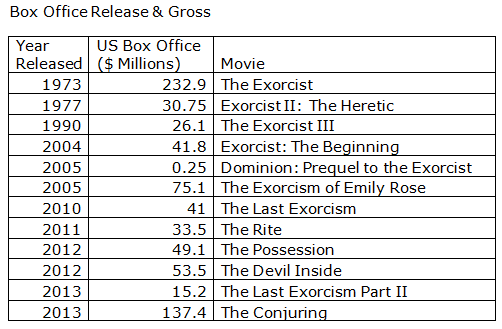 Here are the box office release and gross for just a slice of the overall exorcism cinema.

Over the course of 2014, we will use this blog to begin our discussion of our readings of the exorcism cinema.  We will share our readings of the representations of the characters, discourses, and tensions in each film.  We will share our thoughts about what these representations mean for how these films reflect, reinforce, and/or challenge our notions of gender appropriateness, feminism, patriarchy, religion, and science.  We will discuss what others have said about these films, and specifically The Exorcist, such as how the struggle between possession and exorcism reflects social and cultural anxieties about the female sexuality — the tension between feminine innocence and sexuality that the patriarchy fears and seeks to control.

We will also discuss our thoughts on how this struggle and its representation speaks to female empowerment and agency under, with, and against patriarchal structures — it may be that the demonic possession is the women’s chance to speak back to patriarchal repression, which the male priests find threatening and must dispel.  We believe we are not just dealing with sexuality here – we are dealing with agency.  It is not just about women’s sexuality and expression of sexuality – it is that through such expression their empowerment, power, and agency are enacted, and that is why their sexuality must be repressed.  The use of demonic possession is not just to show the tensions we have about female sexuality – it is to show  the tensions we have about women finding their voice and their power to take control in their own lives.

We will address questions about:

These are just some of our current questions, and it may be that as we progress in this research we will have many, many more, or narrow down to the pertinent ones we seek to answer.  We encourage our readers to offer their own thoughts, ideas, questions, and concerns as we walk this research path.

14 responses to “The Demon Within: Tensions in Exorcism Cinema”